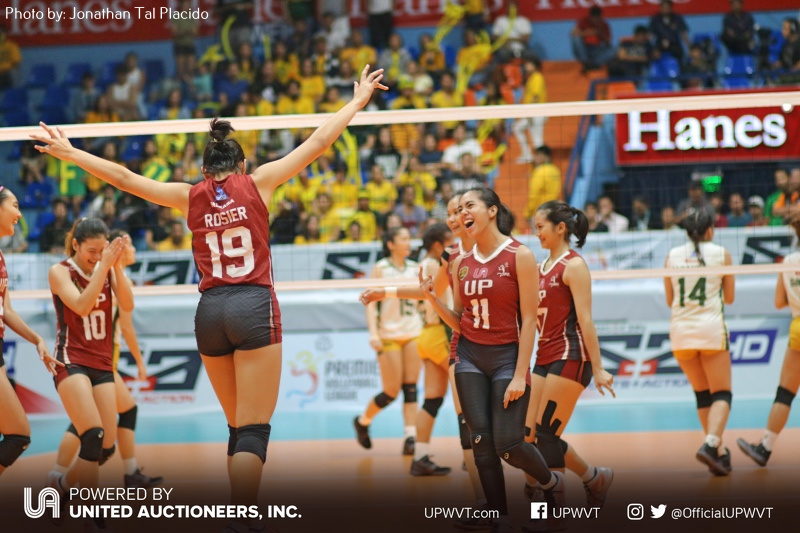 The UP Lady Fighting Maroons are the newest Philippine Volleyball League Champions! The squad dominated the FEU Lady Tamaraws in five sets to sweep the best-of-three finals series.

After years of missing out on the finals, the UPWVT is finally bringing home the gold to Diliman.

It was a hot start for the Lady Fighting Maroons as they torched their way past the Lady Tamaraws. Newly minted Conference MVP, Isa Molde, played inspired volleyball as she led her team in the first set. Marist Layug also had a block party, keeping FEU’s offense at bay. She scored 7 markers in the first to take the set, 20-25.

Errors on UP’s side kept the start of the second very close. It was a tight back-and-forth between the two squads, with everything tied at 15-all. The Maroons failed to pull away despite the consistent performance of Molde.

Midway into the set, Rosie Rosier found her rhythm to help spark a 5-0 run. Together with Layug’s persistent scoring, the team was able to quickly wrap up the set, 18-25.

It was the Lady Maroons show at the start of the third as they demolished the Tamaraws, leading 0-8.

However, Heather Giuno-o’s squad did not lose heart as they fought back to tie the set, 16-16. The momentum shift rattled the Maroons, forcing them to commit reception errors. FEU finally took the lead, 17-16.

Team captain Ayel Estrañero tried to calm the team’s nerves, but it was not enough as jitters took over. FEU bagged the third, 25-23.

The fourth set saw both teams taking shots at each other. The Morayta-based spikers again took the lead in the set. But Molde, Rosier, and Marian Buitre took matters into their own hands with a 5-0 run to give UP back the lead, 14-17.

However, errors on the side of the Maroons favored the opponents, forcing a fifth and deciding set, 25-20.

As if reversing Game 1’s fate, FEU dominated the final set, leading by as much as 6 points. But UP showed so much heart, climbing back from being down 12-6, to score the upset and win the championship match, 13-15.

Molde led UP with 22 points and was also hailed Finals MVP.

Layug and Buitre each had 12 a piece, while Rosier had 10 markers. Ayie Gannaban and Estrañero also poured a combined 12 points.

The PVL Championship is the first for the UP Lady Fighting Maroons under the leadership of Coach Godfrey Okumu. With this win, the team proves to be a contender in the upcoming UAAP Season 81.