A different side to your UP Lady Fighting Maroons: Marian Buitre03 March 2018Next

The girl in the middle: Marist Layug 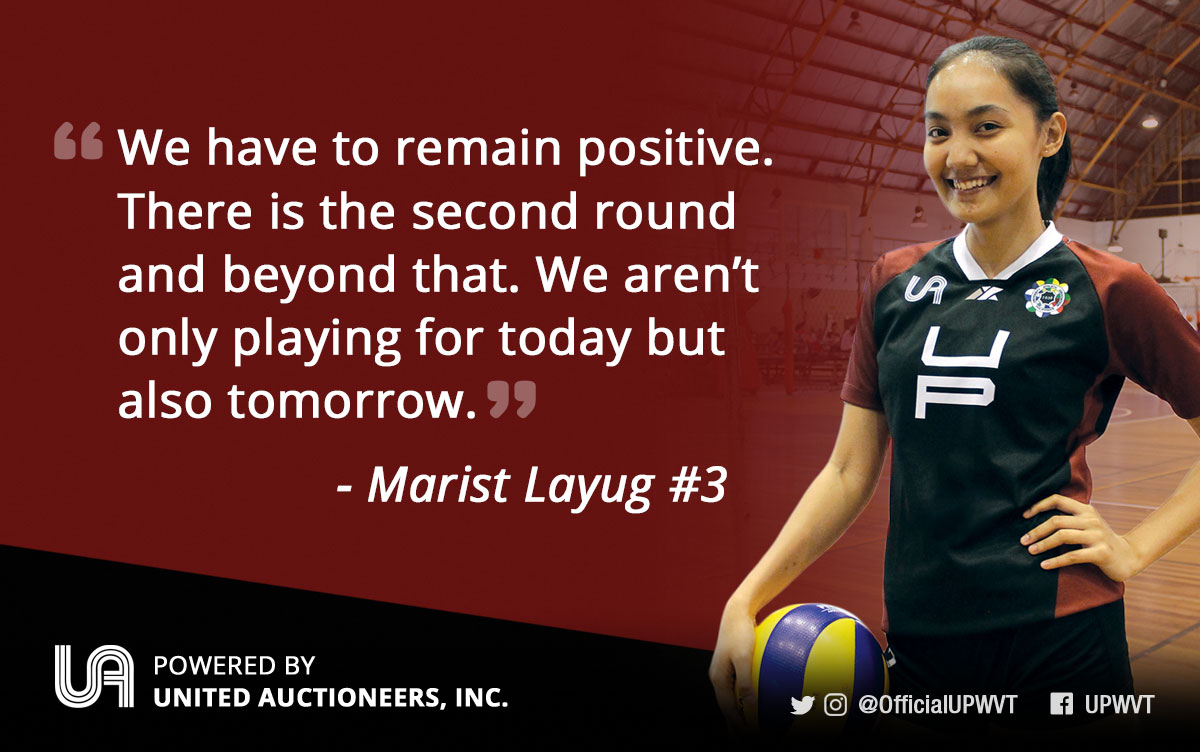 She could be a tall chef. And she will be. She’ll cook her way into your hearts with her Afritadang Manok. With no tomato sauce, Marist Layug is quick to clarify. “You’ll love it, trust me,” she laughs. And you believe her. “I hope to open up a restaurant too. Sana, one day. Mag-ipon din para doon.”

She could be a tall beauty queen. And she will be trying out for Binibining Pilipinas when she’s done with school where she is taking up Hotel, Restaurant and Institution Management (HRIM). “I did some modeling before,” Marist shares. “But I had to put it aside because I fell in love with volleyball. But I want to try out for Bb. Pilipinas. Besides, Michelle Gumabao is also doing the same.”

But for now, the six-foot-flat Layug is patrolling the middle for the University of the Philippines Lady Fighting Maroons. “I am being given the chance now and I am trying to gain more confidence with the chance that Coach Okumu is giving me,” Marist says.

“I learned the game when I was young and I fell in love with it,” she shares. “Since I was tall, I was made to play the middle position.”

It is no coincidence then that her three passions and dreams places her front and center.

She laughs. Coincidence. Maybe not. She does see the humor in it though.

However, Layug better get used to the attention more so since she is getting more playing time in her third year at UP and with the team. When you learn that she grew up watching Aby Maraño lead La Salle to a bunch of titles (and be vocal while at it), it isn’t a surprise that Layug is thrust right in the middle of things. “I love volleyball because it is challenging,” she postulates as she channels her inner Maraño. “I hope I can help the Fighting Lady Maroons be successful.”

Yet for all her boldness, Layug remains a homebody. She opts to go home in Novaliches rather than stay in the dorm. The eldest of three children doesn’t mind spreading her wings but home is where the heart is. Nothing like good ole home cooking.

“Mom’s cooking is one way to warm my heart especially after a tough day at school and in volleyball,” she declares.

“I love to cook,” she says. “When I eat out, it is tough kasi I compare it to what my mom cooks, what I cook. Iba yung lutong bahay. Malalasahan mo love ni mommy. Sa cooking and sa course ko, you become more maselan about taste and texture”.

Being discriminating also translates into volleyball.

After a tough and somewhat disappointing outing against National University, Marist and her teammates had their usual dinner together. “We just need to stay positive and do something about it,” she now says about this topsy turvy UAAP campaign. “I have to play better as well. And we have the second round pa naman to do something about things.”

She’s now learning to be a bit more vocal. Just like Aby. Just like her thoughts when the restaurant food she eats doesn’t rate to the home cooking standards. Just like learning to walk with heels and with cameras clicking away.

She laughs. It could be purely coincidental. Maybe not.

The girl in the middle has a bright future ahead. Right now, she’s focused on helping the UPWVT ascend.