Coach Joma Angulo – From the Outside Looking In06 April 2018Next 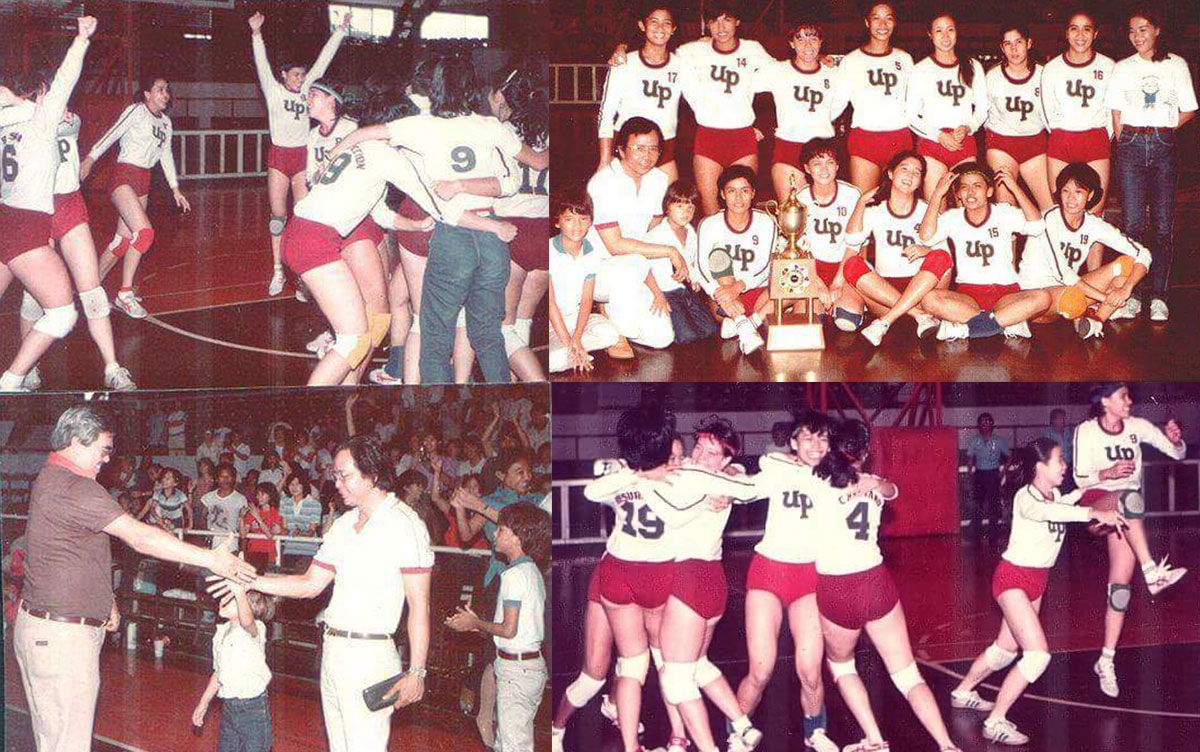 The UP Women’s Volleyball Team of 1982-1983 holds the distinction of being the last UPWVT to win the UAAP Championship. Marissa Altamirano, jersey #16, member of that Season 45 squad, and still passionately cheering for her alma mater from the sidelines, recalls with fondness her varsity life.

“My fond memories of that time? It was the hard work! We would run around the oval, run up and down the bleachers of the old gym beside the law center.”

“For you to be a part of the team, you had to really earn your spot. As a rookie, we had to do everything from mopping floors, setting-up the net, cleaning and pumping air into the balls, and other things. Me? I was also the bench marshall during games.”

“Summer training was the toughest as we had court drills for three hours, three times a week. We did road work and weights twice a week.”

“The team was my family outside my real family.” They did everything together – trained together, ate fish ball together, lost together, won together. Life as a team brought them closer – definitely lifelong friends.

“We had several players who were on the national team but during team practices, there were no superstars. They had to come down from their pedestal and train even harder. We all had passion and determination – we all really wanted to play. I remember that when I fractured my hand once, I still went to train out of fear that I would not be in top condition to play.”

“We were the favorite of all the men’s teams because I had some pretty teammates and we wore “panty shorts”. Hahaha!”

“During those years, we had this annual celebration because we either won the championship or finished second.” The UPWVT won it all in Season 40, 42 then in 45.

“The rich diversity of students in UP allowed me to interact and mingle with the poorest, the most radical, as well as the richest and fashionista classmates helped make me who I am today.”

“At that time, we also had free tuition for a semester because my late father (journalist Louie Beltran) was the Vice-President for Student Affairs. School-wise, it wasn’t easy because we also had professors who disliked student-athletes and they would ask us to drop their subjects.”

“Since we could not be in block sections because of our erratic schedules, we used to line up early in the day just to enroll for the subjects we wanted. Sometimes, we’d wait the entire day at the Faculty Center for the teacher’s prerogative.” Has this experience changed?

“When I look at volleyball today – it is shorter and the rules have changed.” There was no libero then. You only scored on your serve. You can only serve from a limited square area.

“Since we had no sponsors, our uniforms weren’t great. It wasn’t until Atty. Rene Cayetano (the father of then-teammate and now congresswoman Pia Cayetano) gave us shoes that we got to wear Asics!”

“On Game Day… well, back then UP had only one coaster so most of the time we took the bus or taxi to the game venue. At times, we all squeezed into the cars of teammates who had their own vehicles.”

Winning the championship in season 45 was as sweet, as exhilarating, and as satisfying as anyone can imagine victory to be.

“Although we never had a bonfire like the basketball team (still a pet peeve that they were supported more than volleyball was), we were treated like royalty.”

The way we were

Volleyball was beautiful then, and it is still beautiful now. Sports has such a huge impact on a person’s life.

“What I learned from being an athlete in UP is if you survive the system, you can survive outside volleyball. Discipline, determination, dedication, and loyalty were some of the things I learned. The rich diversity of students in UP allowed me to interact and mingle with the poorest, the most radical, as well as the richest and fashionista classmates helped make me who I am today.“